It sounds like Gwyneth Paltrow had a fun 39th birthday, as she was tweeting about her “horrific hangover” the next day. So how does the Goop goddess cure a nasty hangover? 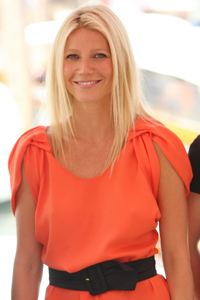 Gwyneth Paltrow joked she was “over served” on her 39th birthday, resulting in a massive hangover the next day.

“Nursing a horrific hangover at the jfk,” she tweeted yesterday. “Nothing like starting an overseas flight dehydrated. Where is the dog, I need the hair.”

Her friend, actress and author Ali Wentworth, responded back, tweeting: “Happy Hang-over! Heard it was CRAZY! Next year Paris!”

“I was over served,” Paltrow responded. “Its not my fault. Or is it?”

The Oscar-winning actress has confessed in the past that “the biggest misconception about me is that I am uptight. I don’t know why that exists, but I hope if people watch Glee that maybe they will develop a different impression of me.”

Her comments in 2006 probably didn’t help her cause, when she told The Guardian, “I’m not really a drinker. Like the last time I got drunk was on holiday in Spain three years ago. I think it’s gross. I really don’t like drunk women; I think it is such a bad look. I think it’s very inappropriate and I don’t like it. I don’t really have drunk friends. My friends are kind of adult; they have a drink. But they hold their liquor. I think it’s incredibly embarrassing when people are drunk. It just looks so ridiculous. I find it very degrading.”

Luckily, Gwynnie has lightened up since then – -and even recently shared some hangover tips. “I have a great hangover cure,” she told England’s Closer magazine. “I take a cold shower in the morning and then I go into the sauna and drink a lot of water throughout the day. Green tea also helps!”