An antique photo for sale on eBay that eerily resembles John Travolta has some wondering if the actor is a vampire — or a time traveler. 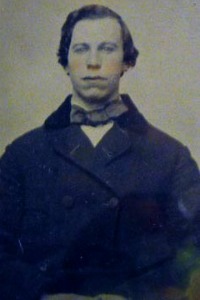 It’s a celebrity conspiracy. The real reason behind the preternatural prettiness of your favorite celebs has nothing to do with surgery or expensive creams. Nope, it’s because they are all vampires, and finally the photographic proof is starting to leak out.

That’s what these eBay sellers would like us to believe, anyway. First it was the Nicolas Cage vampire photo, and now a new antique image that bears a spooky resemblance to actor John Travolta has hit the auction site — and for the low, low price of $50,000 it could be yours!

“I know you are saying John Travolta is alive today in 2011 and he doesn’t look 151 years old,” the Canada-based seller wrote in the listing, which has since been removed.

The seller, an antiques dealer with 100 percent positive feedback on the site who is not the same guy who was selling the Nick Cage pic, has another intriguing theory on Travolta’s doppelganger: Time travel.

“John Travolta is a Scientologist and many Scientologists believe in a type of reincarnation. Of course time travel can’t be ruled out as well.”

John Travolta and Nicolas Cage starred together in the sci-fi thriller Face/Off. Coincidence or Hollyweird conspiracy? You be the judge.

The actor has three movies in the works for 2012: The Expendables 2, Savages and Gotti: In the Shadow of My Father in which he’s playing John Gotti, Sr.

read on for more john travolta