Rob Kardashian has dropped a gossip bomb! The Dancing With the Stars contestant reveals some of his married competitors are hooking up and having affairs.

Rob Kardashian claims the 2011 Dancing With the Stars cast is behaving badly. The 24-year-old told a morning radio show that both married contestants and professionals are having affairs! 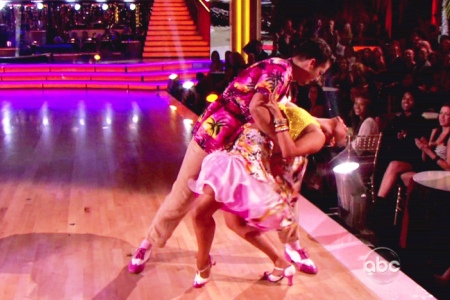 Rob Kardashian is spilling the beans about what’s going on behind the scenes at Dancing With the Stars and a few of his fellow castmates are now going to be in some very hot water with their spouses. Speaking to The Mojo in the Morning radio show on Thursday, the Keeping up with the Kardashians star let the gossip fly.

Already on the topic of married contestants and professionals hooking up, the show host, Mojo, asked Rob Kardashian, “If you could pick any of the couples that were having an affair, which couples would you say, just by their energy with each other?”

Though he had no qualms about dropping the gossip bomb, the 24-year-old held back on naming any names.

Despite his single status, Rob Kardashian insists he and partner Cheryl Burke remain in a strictly professional relationship. “No, I’m all business…I’m in this thing to win it right now because I’m feeling good. No, I am not bringing that weirdness into our little circle,” he said adamantly.

“I mean, I get it, you’re dancing with your partner every day. You’re being all sexy and into them, but I don’t know, it’s not really my thing.”

What do you think of Rob Kardashian’s claims of DWTS affairs?