Watch out, Justin Bieber! 14-year-old Drew Ryniewicz sang a version of “Baby” that blew the judges away. 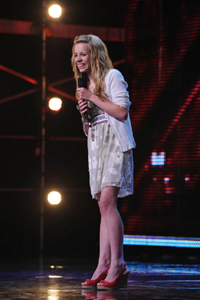 Drew may only be 14, but she has done her research – particularly on L.A. Reid, the Def Jam chairman that actually signed Bieber. “He is a big part of Justin Bieber, the biggest part I would say in his career,” she said.

She couldn’t help but gush over Bieber, as well. “Justin Bieber is so cute because of his hair, the way he flips it is cute!” she said in her intro video. “His favorite colors are purple and red.”

After singing her own version of Baby, all the judges were impressed -– even tough-as-nails Cowell, who said he liked her version better than the original and he could see kids buying that track!

“It’s hard for me because I’m a real Justin Bieber fan and I like the original version which is why it’s so interesting that I prefer your version to his,” gushed Scherzinger.

L.A. Reid had warned before she started singing that he would be “harsh and critical” since he was so close to the song, but after she finished he gave her props. “That was so original. I love how you took it and really made it yours. It was soulful and believable. You are special,” he said.