A witness at the Michael Jackson manslaughter trial testified that the pop star’s kids watched, crying, as Conrad Murray tried to revive their father. 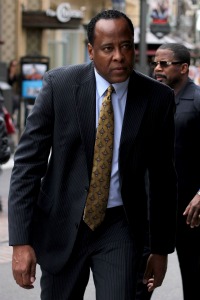 In a shocking piece of testimony, the head of Michael Jackson‘s security team described the scene as he saw Dr. Conrad Murray half-heartedly attempt CPR on his patient — as MJ’s kids watched in shock and disbelief.

Faheem Muhammad said that when he was called to Jackson’s home, he found a sweaty Conrad Murray hovering over Jackson, who was laid out on the floor.

“He appeared to be administering CPR. He appeared very nervous,” Muhammad said, describing how the doctor was administering chest compressions with his left hand only — then asked if anyone knew CPR.

Muhammad said Jackson appeared dead, saying his “eyes were open and his mouth was slightly open.”

“Immediately, I was shocked just seeing him. Shortly after that, I realized that his children were standing outside of his room… the two older ones,” Muhammad said.

“Paris was on the ground balled up crying and Prince… was standing there… and he just had a real shocked, just slowly crying type of look on his face,” he said.

Muhammad said he quickly moved the children where they couldn’t see what was happening and called for the nanny.

Conrad Murray is on trial for manslaughter, accused of negligently administering a fatal dose of Propofol to the pop star. If convicted he faces four years in prison.