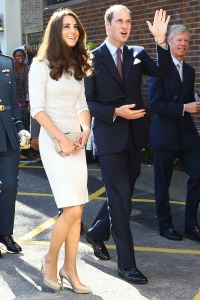 Kate Middleton’s princess lessons are being put to good use already. Catherine, Duchess of Cambridge, joined her husband Prince William to open a children’s cancer center at a hospital that was one of Princess Diana’s pet projects.

The royal couple made one of their so-far rare official engagements to open the Oak Center for Children and Young People at South London’s Royal Marsden Hospital.

Princess Diana chose the hospital for her first solo charity visit in 1982 and later became the hospital president — a role taken over by Prince William in May 2007.

William was a bit bleary-eyed after pulling an all-nighter at his job as a Royal Air Force search and rescue helicopter co-pilot.

“It was a bit of an early morning,” Will joked to reporters. “It’s great to be here finally — we’ve been talking about this for a while.”

The royal couple met with lots of young patients, including 12-year-old Alice Marples, a girl who was chosen to give the Duchess a bouquet and had interviewed Wills — also known as the Duke of Cambridge — two years ago for a CBBC news show. Marples is receiving therapy for a brain tumor.

“The Duke is looking forward to seeing Alice again and finding out how she has been,” a St. James’ Palace spokesman told the London Evening Standard before the visit.

“Through his close connection with the hospital he has met many inspirational young people, like Alice, who have shown such bravery in battling their illness. Tomorrow, he is keen to show the Duchess the incredible work the Royal Marsden does to help Alice and others like her.”

What’s next for the royal couple? Lots of couple time. They have to get in as much as possible now before Prince William is deployed to the Falkland Islands next year — a trip he must take without his new bride.