Matthew Morrison heard Jonah Hill’s comments about him on Late Night With Jimmy Fallon. Now, he’s challenging the funnyman to a dancing duel to settle the score, once and for all.

It doesn’t look like Moneyball actor Jonah Hill will be guest-starring on Glee any time soon. The newly-slim funnyman appeared on Late Night With Jimmy Fallon last week to promote the film and revealed his unlikely feud with Matthew Morrison. 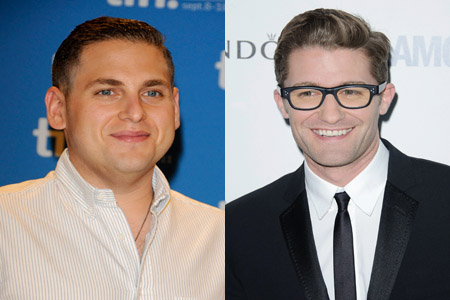 Hill described how he sold a new show to Fox and had to appear at the network’s upfront presentations earlier this year. Being the new kid, he sat by the only person he knew: high school friend Zooey Deschanel. The New Girl actress was chatty while a Fox executive spoke — but the bigwig scolded him.

Hill then went on to reveal that Morrison had to put in his two cents as well.

“He goes, ‘Yeah, Jonah can’t you stop talking for a second?’ This dude from Glee calls me out… like ‘Ha ha, I’m a clown,’ ” Hill deadpanned to Fallon.

It was obvious the interaction struck a chord with Hill.

Hill again saw Morrison a few weeks later at a “douchey” Hollywood party, chatting with Gossip Girl star Chase Crawford. The comedian eavesdropped on his new nemesis and heard something he wasn’t expecting.

“I hear … Jonah Hill … and they both start laughing. I’m the punch line in this guy’s joke. He doesn’t even know I’m at this party,” Hill said. “I’m gonna wring his neck the next time I see him!”

“I’m just kidding, you seem like a great guy,” he deadpanned to the camera.

We all waited to hear what Glee’s Mr. Schue had to say about the situation — and he finally spoke via a video aired on Fallon’s show.

“I heard what went down on your show the other day,” Morrison said to Fallon in the video. “I heard that Jonah Hill told me to bring my [expletive] next time. Well, guess what? This is next time.”

Morrison then showed off some of his Broadway dance moves and challenged Hill to a showdown on Fallon’s show.

“Nobody messes with someone in musical theatre,” he added.

We’re not sure what to make of this: Hill seemed legitimately upset about Morrison’s slights, but the Glee star is turning it into a joke.

What do you think of this feud — real, or a plot to promote Moneyball and Glee?