Demi Moore is about as famous lately for her tweets as she is for her acting career. The actress is always at the ready to update her status on the social networking site, but lately, some of her tweets have become more personal than usual. 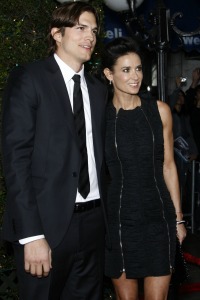 Demi Moore has never hinted at any trouble in her marriage to actor and Two and a Half Men star, Ashton Kutcher.

So when the outspoken actress, who posts on Twitter regularly, began sending cryptic relationship tweets, it left followers more than a little confused. Are they about Ashton?

Said Moore on September 23, “When we are offended at any man’s fault, turn to yourself & study your own failings. Then you will forget your anger”-Epictetus.

On September 18, Moore posted, “Whoever is out of patience is out of posession of his soul.”

Yet again, on September 17, Moore posted this message to a friend, “Work on loving yourself. Happiness is an inside job between you and your higher power. Whatever that is for you!”

The following are the tweets that preceded those listed above. September 16, “2day can I feel some 1 else’s heart pain needs desires as U can feel your own? At the core we’re all reaching 4 the same.” September 14, Deepak Chopra, “A spark of truth eventually burns down the forest of ignorance.”

The last time Moore mentioned Kutcher in a tweet, it was regarding his premiere episode of Two and a Half Men. She said, “Funny how the body provokes such strong judgement of others. I agree with @billmaher, ‘He’s not parading around. He just doesn’t have pants on!’ “

Kutcher, on the other hand, is not remaining quiet on the subject of breakup rumors. He also took to his Twitter account and stated, “Don’t believe the hype.” Hype is a song by the band Public Enemy.

Speculation about a divorce between the couple, who have been married six years, came hot on the heels of an accusation by 23 year-old Sarah Leal, who claims she slept with Kutcher on his anniversary, September 24, during a boys’ night trip to San Diego. As of yet, there is still no confirmation from either camp on an impending divorce.