After a long television and film career, the actress is returning to the small screen and starring in the new ABC comedy Last Man Standing with Tim Allen. Read on as we turn the star spotlight on Nancy Travis! 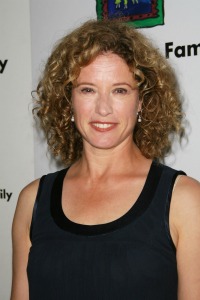 Born in New York City, actress Nancy Travis spent her childhood in Massachusetts, Baltimore and Boston. She returned to the Big Apple to focus on acting after graduating from high school. Honing her craft in the theater, she won a coveted spot with the prestigious American Jewish Theater and roles in Neil Simon’s Brighton Beach Memoirs, Frank Pugliese’s Aven U-Boys, King of Connecticut and I’m Not Rappaport.

Travis moved from the stage to film with parts in some of the biggest hits of the ’80s, ’90s and 2000s, including Three Men and a Baby, Internal Affairs, So I Married an Axe Murderer, Chaplin, Beyond Suspicion, The Sisterhood of the Traveling Pants and The Jane Austen Book Club.

On the small screen, Travis appeared on hit shows like Almost Perfect, Becker, The Bill Engvall Show, Desperate Housewives, Grey’s Anatomy and How I Met Your Mother.

With more than 56 film and television productions under her belt, Travis’ next project is Last Man Standing. She co-stars opposite Tim Allen, playing a smart and loving wife who doesn’t miss much. A hilarious take on one man’s life as the sole male among a family of women, the sitcom is sure to be a hit.