Usually a man who likes to joke rather than speak out against hateful rumors, George Clooney took to the press to refute a story that ex-girlfriend and Dancing With the Stars contestant Elisabetta Canalis, sent him angry texts once he started dating Stacy Keibler.

Many years ago, George Clooney publicly stated he would never talk about his relationships to the press. That they were part of his personal life and not his work. So imagine everyone’s shock when he spoke in a statement reported by AceShowbiz.com about a story involving former lover Elisabetta Canalis. 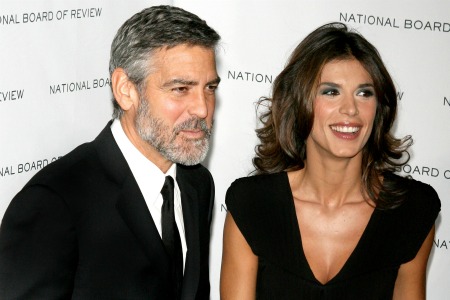 Clooney released a statement that said, “I never comment on my personal life unless it affects others…and this lie affects others. Since I would be the only actual witness, I ask you to correct your story immediately, but that would assume you care at all about telling the truth.”

He also stated that the story was, “completely fabricated.”

Clooney is referring to a US Weekly story stating that Elisabetta Canalis was upset to hear about Clooney’s involvement with Stacy Keibler and reportedly sent a series of nasty texts to George where she told him off about his latest girlfriend.

In a statement from Canalis’ representative, it revealed, “US Weekly was informed that the details of their story were untrue, that Elisabetta and Stacy have never met and that she wasn’t aware of who Stacy was prior to receiving multiple questions about their apparent relationship. She certainly has never sent her nasty texts either.”

Both Canalis and Keibler were both contestants on Dancing with the Stars. Canalis was the latest celebrity to leave the ballroom.