Congratulations are in order for Mike Myers and wife Kelly Tisdale — the pair have welcomed a baby boy! What’s the little guy’s name? Let’s just say he’s in good company with ____ Lee and _____ Jonze. 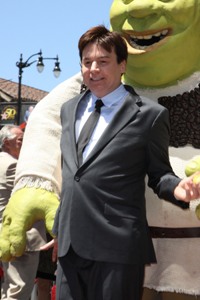 Yeah, baby — Mike Myers’ baby boy has arrived! According to Life & Style the first child for the couple was born two weeks ago — and his name is Spike.

Further details about baby Spike are being kept under wraps by the couple who wed last fall in a secret ceremony after dating since 2006. SheKnows has reached out to a rep for the Shrek actor to confirm Spike’s arrival.

Looks like the moniker comes with a side of creativity!

Mike Myers and Kelly Tisdale confirmed they were expecting a child in March, but kept true to their privacy by revealing little more about the pregnancy.

The 48-year-old will likely soon be reprising his role(s) in Austin Powers 4. “Things are on track,” the International Man of Mystery said recently about the latest edition of the franchise.

Congratulations to the new parents on welcoming their first child!

Are you a fan of Mike Myers’ baby name pick?