Tim Allen came into our living rooms and entertained us for the better part of two decades. Now the funnyman is back with a new network comedy, Last Man Standing, co-starring Nancy Travis. Learn all about Tim Allen as he steps into our star spotlight! 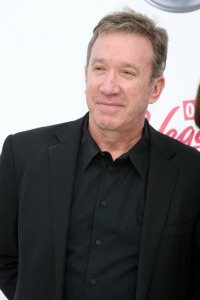 Born in Denver, Colorado, Tim Allen’s life changed when he was 11 years old after his father was killed by a drunk driver. Two years later his mother married her high school sweetheart and moved Tim, along with his five brothers, to Birmingham, Michigan with his three step-siblings.

Allen’s love for broadcasting was developed at Western Michigan University, where he received a bachelor degree in communication with a specialty in radio and television production. The year before he graduated, he stepped onto the stage at a comedy club for the first time — and never looked back.

Local Detroit-area commercials led to cable comedy shows, and eventually a move to Los Angeles, where he became a member of The Comedy Store team. Late night talk show appearances parlayed into albums and TV specials, until ABC came knocking on his door.

ABC’s television series Home Improvement made Tim Allen a household name. He played lovable Tim “The Tool-Man” Taylor, an accident-prone father with a heart of gold. The role lasted from 1991 to 1999 and won Allen a Golden Globe for Best Actor in a Television Series Musical or Comedy in 1995.

Moving from television to film brought Allen to a whole new — and much younger — audience. He voiced Buzz Lightyear in the blockbuster animated children’s film Toy Story, and played a man who reluctantly takes on the role of the Christmas icon in The Santa Clause — roles that earned him the title Disney Legend in 1999.

In recent years, Allen has focused on acting in movies like Zoom and Crazy on the Outside, and promoting Michigan tourism and his stand-up career. But now, he’s back on the small screen.

In Last Man Standing, Tim Allen plays Mike Baxter, a marketing executive for a sporting goods store who is the only male in his family. Nancy Travis co-stars as his smart and loving wife and Hector Elizondo plays Allen’s boss.

Watch the premiere of Last Man Standing October 11, 2011 on ABC.