The Chief makes two game-changing announcements, Owen gets a promotion and all the doctors are put to the test on Grey’s Anatomy: “Take the Lead” tonight on ABC.

Chief Webber (James Pickens, Jr.) takes off the training wheels tonight on Grey’s Anatomy, clearing Meredith (Ellen Pompeo), Cristina (Sandra Oh), Alex (Justin Chambers) and the other fifth-years for solo surgeries, but it’s his resignation that has the rest of the staff talking. As several Seattle Grace docs struggle to “Take the Lead,” things remain tense as ever between Derek (Patrick Dempsey) and Mer and Cristina and Owen (Kevin McKidd). 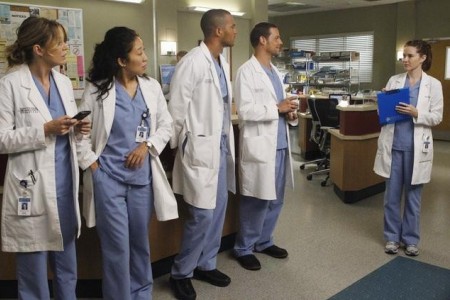 Having taken the fall for Meredith, Webber resigns as chief this week and hands the reins over to the ever-capable Owen. Owen is sure to have no trouble taking the lead, but poor April is still struggling.

The new chief resident tries to wrangle her fifth-year residents into teaching the newbies, but as Sarah Drew warned, no one wants to be wrangled by April — especially after they’ve been cleared to lead their own surgeries. Meredith, Cristina, Alex and Avery (Jesse Williams) kick back in her office, toss aside her schedule and wager the entire month of skills labs. Whoever performs worst on their first day of solo surgeries will take on the whole load.

Each of the cocky young docs is sure someone else will be the loser, but they’re soon reminded that even the most routine procedures can take a turn.

Meanwhile, Seattle Grace’s super couple is desperate for news on Zola, who was taken from them after Mer’s machinations backfired last week. When Meredith pushes Derek to tell her where she stands with him and whether they still have a future, with or without Zola, Derek balks. After she ruined his trial, he may not be able to get past his trust issues, in or out of the hospital.

While Derek continues to grapple with Meredith’s medical misstep, Cristina and Owen try to get back on track after their abortion. The husband and wife are sharing a bed again, but it’s unlikely they’ve gotten their groove back since they can barely talk to each other.

Grey’s Anatomy: “Take the Lead” airs Thursday, Sept. 29 at 9:00 on ABC, followed by the season premiere of Private Practice.