Heidi Klum debuted her new fragrance Shine yesterday in Hollywood and hinted to SheKnows about her upcoming elaborate Halloween costume. 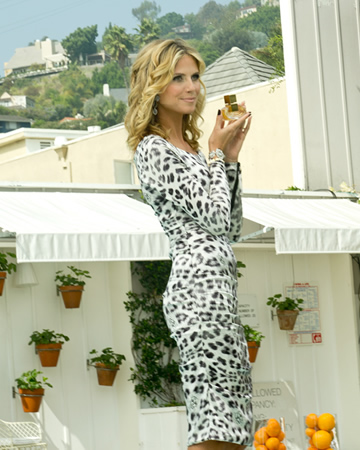 Though she always seems to change face for Halloween with a crazy costume, she’s still the mostly innocent-with-an-edge Heidi Klum that is never afraid to give her input. Here’s her forecast for Halloween style and beyond.

So was her animal print outfit a nod to what she’ll be sporting this Halloween? From Heidi’s hint, we suspect it’s at least in the same family.

Klum is notorious for her extreme getups. Two years ago, she and hubby Seal went the animal route as well, wearing matching crow costumes. She tells us this year they will be matching as well.

“We will be very similar, a little hairy,” she said.

The Project Runway host’s dress however was by no means over the top, hitting one of fall’s top fashion trends right on the nose.

“I think it’s all about crazy prints right now and mixing and matching them,” Heidi told SheKnows. “I have a great new leopard purse too. It’s all by Thomas Wylde, which I love.”

Heidi’s look was topped off with a wide grin, presumably sparked by the accomplishment of finally launching Shine, which took her a year to create.

She told us the perfume creation process is a lot more complicated than you would expect.

“I worked with this amazing French nose who came from Paris many times to me in Los Angeles and New York when I was working there,” she said. “Basically we would just talk about all the things that I love in smells and different roots that I like. He comes over and has all the little sniffing strips. They all have numbers so we don’t mess anything up. You sniff, and sniff, and sniff, all day long.”

And she says that with the help of her honey, she found just the right mix.

“I wanted something that is super feminine, that is very light,” she said. “My husband definitely got an input in it because I do want to smell good for my husband. He doesn’t like it when I smell too strong. He still wants to smell me with a little bit of perfume. “

You can pick it up now at Kmart, Kohls, Rite Aid, Sears, Target, Walgreens and Walmart stores nationwide.