Jessica Simpson is reportedly pregnant with her first child with fiancé Eric Johnson. Is this why she has postponed her wedding? 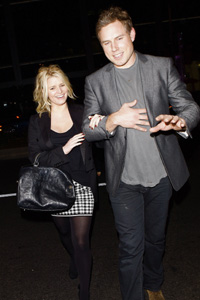 There may be a reason why Jessica Simpson is hiding her curves behind loose shirts and flowing dresses — she’s pregnant! An insider reports that the singer/actress/fashion maven is indeed pregnant with her first child with her fiancé, Eric Johnson.

The source says that Simpson, 31, wouldn’t drink her champagne and sent it back at Johnson’s 32nd birthday party.

Simpson, who is reportedly due in the spring, is already having “kooky cravings,” insists the friend, saying she loves nacho chips dipped in chocolate, “which satisfies her urge for salty and sweet.” She has also reportedly been craving cheese-flavored popcorn and virgin margaritas.

Despite reports that Simpson has postponed her wedding due to cold feet, the source says that they still plan on marrying in November. “Jessica might have to take out her dress a bit” and they see this pregnancy as “the best wedding gift ever.”

Simpson has made no secret of her desire to start a family. “I definitely see myself having a family with Eric, so that’s exciting to think about,” she said.

Her rep has not responded to requests to confirm her pregnancy news, so for now, we will have to file Simpson under “possibly pregnant” and the bump watch is on!