Not only can you now buy Miss Little Havana, the latest album from Gloria Estefan, but the queen of Latin pop is giving an inside look at each and every single track. Watch below! 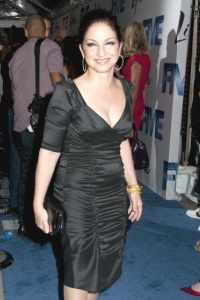 Gloria Estefan’s Miss Little Havana hits stores today! The new album from the woman known as the queen of Latin pop comes with its very own track-by-track guide, giving insight to each song created by Gloria Estefan, Pharrell Williams and other contributors.

“I gotta tell you this is one of the most fun projects I’ve ever done,” the 54-year-old told Billboard.”Pharrell and I really clicked. We captured a lot of raw emotion. We got a really good gamut of what we considered different kinds of dance music from Pharrell’s world and from mine.”

The song “On” even features Gloria Estefan’s 16-year-old daughter Emily “shredding” on guitar!

Here Gloria Estefan describes each track of Miss Little Havana in her own words, giving personal notes on how the songs came to be. Be sure to also check out the video of Gloria below.

“There’s very little bass on the whole record. Usually it’s the 808s that are carrying the low end. So this song does have a bass that comes in that takes the song into overdrive.”

“I love ‘Heat’! Pharrell arranged and performed the first nine tracks on the record. He had done amazing arrangements of percussion but I really wanted to bring real percussion to the project. We’ve got the timbales and the congas just kind of battling it out.”

“It’s about how the working man and how anybody have a great time with music and dance… I wanted to give it a very carnival, festival feeling, the type you hear in street parties in Brazil and Cuba, that people would go down the streets dancing to, just a crazy Caribbean feel to it.”

“The horns are actually carrying the bulk of the harmonic background of this record which I find really cool and different.”

“This is a straight up Cumbia directly from Colombia. We used the actual drums, and also the drums that are used in typical Cumbia. In a nutshell, this is about Pharrell, horns and drums.”

“This was my kids’ favorite song. Something about it speaks to them, it’s kind of reminiscent of old ’70s disco, it’s got the wawa guitar that we put in. Goes from very sweet to nasty, and I love that.”

“‘Make Me Say Yes’ is reminiscent of early ’90s techno pop. I love this because it’s got a lot of layered vocals on it, very different sound from the rest of the record; it’s one of my favorites from the get go.”

“I wanted to have at least one ballad for my fans because this has been who I am throughout my career. It’s literally talking about my memories growing up in Miami.”

“We wanted a very woody, old fashioned sound, cause its jitterbuggy [in] this song. It’s got clarinets, it’s got saxes, and a whole different vibe-it just sounds like you could be in the ’20s but with hardcore dance.”

“The brass section is killer. You could strip out the dance part and it is a straight up Merengue from Santo Domingo but it’s got this really hard edge.”

“To me, music has always been medicine. Music, dance, those things that unite us as human beings.”

Will you be picking up Miss Little Havana, the latest album from Gloria Estefan?