Ashton Kutcher might have a lot of power on Two and a Half Men, but CBS executives are peeved that he used the show to promote his personal business ventures.

Ashton Kutcher is in trouble this week, in more ways than one. Demi Moore’s husband reportedly cheated on the gorgeous actress with a young girl last Saturday in San Diego on what was their sixth wedding anniversary. 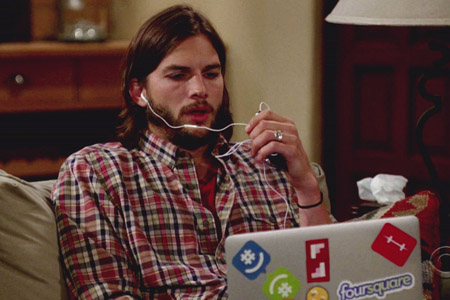 Now, CBS is more than a little peeved at their new Two and a Half Men star for giving free advertising to several web companies, including Foursquare, Flipboard, Hipmunk and Chegg. The problem? Kutcher has a financial interest in all the companies and gave them free primetime advertising on the show.

“Check out @aplusk showing some @foursquare & @GroupMe laptop-sticker love on Two & a Half Men,” the star tweeted during the show, along with a screenshot of his laptop.

CBS isn’t pleased. “This was not part of any advertising transaction with CBS,” a network spokesman said in a statement “Our policy is to disclose such financial interests in a credit at the end of the broadcast.”

Foursquare was mentioned during the show’s credits, per FCC regulations. However, CBS now wants the company to pay up or they’ll blur the logos in future airings of the episode. It’s likely the cost of that sort of advertising will run each start-up a considerable amount of cash — and the network always wants to boost the bottom line.

Maybe Kutcher can give some of his cash back to the network to make up for it? After all, he’s making a reported $700K per episode for taking Charlie Sheen’s place on the sitcom.

This isn’t the first time Kutcher has come under fire for promoting his own business ventures. The DNA Foundation creator took over as a guest editor for Details magazine last month and used the space to promote the businesses without admitting his financial stakes in the company (a big journalism no-no.) The FTC considered investigating Kutcher, but ultimately declined to pursue charges against him.

Do you think Ashton Kutcher’s laptop advertising was smart or sneaky business?