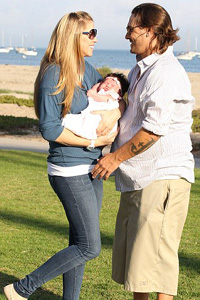 Kevin Federline and his girlfriend Victoria Prince enjoyed showing off their baby girl, Jordan Kay, in Santa Barbara, California over the weekend. Federline, who has four other children with Britney Spears and Shar Jackson, was spotted cradling the baby, pushing her in the stroller and even shopping for cute pink clothes.

Jordan was born August 15 and the couple have been staying at home enjoying their newborn baby since her birth. No word if his other children, Sean Preston and Jayden with Spears, Kori and Kaleb with Jackson, have seen baby Jordan.

Federline, who is a former backup dancer, has been a stay-at-home dad. He did appear on VH1’s Celebrity Fit Club last year to help lose the weight he had gained.

Even if the weight didn’t necessarily stay off, it appears that Federline, 33, is happy with his daughter and with his relationship with Prince, a former volleyball player turned teacher. The couple has been dating for two years – and Federline says he would like to eventually get married.

‘I do want to get married. But I will wait until I have the courage to propose,” he said.