Scrubs co-stars took their happiness over the repeal of Don’t Ask, Don’t Tell to Twitter. Check out their hilarious exchange.

Zach Braff and Donald Faison spent years playing best friends on the long-running comedy Scrubs. Turns out, the twosome are just as close in real life. The devious duo spend plenty of time joking back and forth on Twitter — and they even turned last week’s official repeal of Don’t Ask, Don’t Tell into a slightly crude joke. 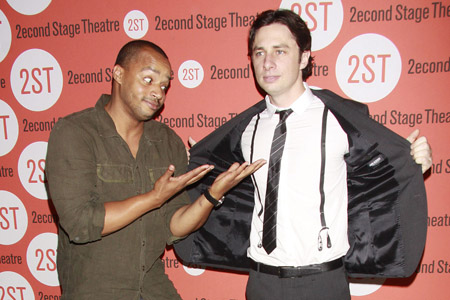 “@donald_faison we can finally ask AND tell!!!! Woo-hoo!” Braff tweeted to Faison on September 20.

“I’m going to Ask And Tell the [expletive] out of you when i [sic] see you man,” the engaged Faison tweeted back.

“I’m going to tell all over your face,” Braff replied, making a veiled sexual joke. “dont [sic] worry, I sent this privately. When are we gonna see that new movie with that teenage werewolf who has abs?”

The brief exchange caught the attention of several fans who posted it on the social bookmarking site Reddit, where it later made the front page. It was funny — and nothing worse than what joking college guys do with their buddies. Most Reddit users commented that they appreciate the bromance between the former co-stars.

“Wow! Me and @donald_faison made the front page of reddit. And I kinda know what that is…” Braff tweeted.

Other celebrities also celebrated the end of Don’t Ask, Don’t Tell on Twitter, including openly-gay celebs like Ellen DeGeneres and Wanda Sykes.

“Congratulations to all of our service members who can now truly be all that you can be. #DADT was a hot mess,” Sykes tweeted last week.

Do you think Braff and Faison’s joke was all in good fun — or did it cross the line?