Jessica Simpson has postponed her wedding to Eric Johnson, according to reports. 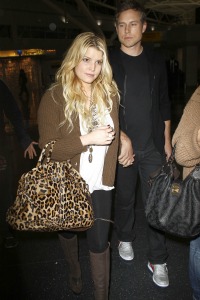 Jessica Simpson got engaged to Eric Johnson in what many thought was a fierce competition to beat her ex Nick Lachey and his then-fiancée Vanessa Minnillo to the altar. Ten months later, wedding bells have yet to ring. What gives?

Sources say it’s a case of cold feet — and that Simpson won’t commit to a date.

“Everything is up in the air,” an insider told Us Weekly. “She can’t figure out what kind of day she wants. Some days she wants a big wedding in Hawaii, then other days she wants something closer to home.”

SheKnows reported in August that Simpson is shutting her family out of her wedding details.

“She was so gung ho about planning their wedding, and now she’s gone dark,” said a pal. “She won’t commit to a date.”

Rumors that Jessica Simpson is pregnant may be fueling the fire. Does Simpson want to wait until after her maybe baby is born and she can drop the pregnancy weight before she walks down the aisle? That would be an unusual decision for the singer, who was once a Christian vocalist and whose father Joe Simpson is an ordained minister.

In the meantime, Jessica is busy acting as a mentor in the new reality competition Fashion Star with Nicole Richie. Her ex-husband Nick Lachey married Vanessa Minnillo in July.

Jessica Simpson is keeping her “boobies”