Joan Jett is one of fifteen nominees for the 2012 class of the Rock and Roll Hall of Fame. The list includes some of the best 1980s acts, including Jett, The Beastie Boys and The Cure. 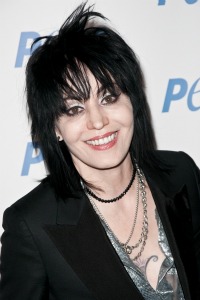 Each year the controversy surrounding the inductions into the Rock and Roll Hall of Fame in Cleveland grows stronger and stronger, and this year is no exception. The list grows more and more diverse and out of the range of what many purists consider true rock acts.

From this list, five acts will be chosen for induction.

Several of rock’s female pioneers are finally getting their due, like Jett, but so are ’80s rock and rollers who changed the face of the music world, such as Guns, Beastie Boys and Chili Peppers.

As usual, there is a strange mix of bedfellows that are also added to the list. The obvious snubs? Acts that actually moved music forward rather than units sold.

Bands like Hall and Oates, The Smiths, Bon Jovi, KISS, Rush, Iron Maiden, Depeche Mode, Motley Crue, Stevie Ray Vaughn, Billy Idol, and T. Rex to name a few, should be inducted without question, as they changed the landscape of their respective fields of music at a time when the industry had gone stale. These bands have come up time and again every year, as some of the biggest snubs in the industry.

An issue that has long haunted the Rock and Roll Hall of Fame inductee list is the known influence of Rolling Stone publisher Jann Wenner. According to an article in the Huffington Post, Wenner has been repeatedly accused of injecting his personal taste into the selection of acts that make the cut. True or not, the Hall of Fame list is always good water cooler conversation and whether or not they make the cut, an act that makes its mark on the world of music knows what they have done and do not need a night of fawning to tell them so.