Demi Moore and Ashton Kutcher on the verge of a split after another woman accused Kutcher of cheating, according to reports. 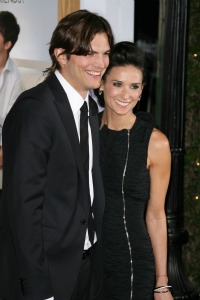 Ashton Kutcher is being accused of cheating — again. The Two and a Half Men star allegedly spent his sixth wedding anniversary away from his wife Demi Moore and in the arms of a woman he met while boozing it up in San Diego.

According to Star magazine, Kutcher met Sara Leal at a San Diego nightclub, and since their liason his fling has lawyered up.

“Ashton didn’t look like someone who was celebrating a wedding anniversary,” said one clubgoer.

The story first broke on TheDirty.com when a friend of Leal’s — who also works at the club where she and Kutcher met — spilled the beans.

“I’m a female who works at [redacted] who happens to be friends with Sara Leal, probably not after this,” wrote the pal. “I’m sick to my stomach over what happen [sic] last Friday night. Like most people on earth I worshiped [sic] Ashton Kutcher and Demi Moore until Ashton Kutcher [expletive] my friend Sara Leal at 4:30AM technically Saturday morning in his room on the 12 floor at the Hardrock [sic] Hotel in San Diego. Ashton Kutcher told Sara Leal that him and Demi Moore are separated and the public doesn’t know yet. Smooth line Ashton, she was going to [expletive] you anyway.”

The news comes hot on the heels of the release of Demi Moore’s new movie Five. Where does this leave the actress? Broken-hearted and out the door, according to sources close to the couple.

“Ashton and Demi have separated and the marriage is over,” an insider told Star. “The relationship ended because of Ashton’s serial cheating. It’s a painful time for Demi.”

SheKnows is awaiting comment from reps for both Kutcher and Moore. Meanwhile, both have been mum on the subject on their usually very open-book Twitter accounts. Star last accused Kutcher of cheating almost exactly a year ago, prompting Kutcher to threaten a lawsuit.