Punk-funk rockers Red Hot Chili Peppers are taking 2011 by storm. The band is back with a new album aptly titled I’m With You and a new member, Josh Klinghoffer. After 25 years, the California boys are still kicking!

Red Hot Chili Peppers or RHCP have returned to the forefront with a new album and a new honor. The Rock and Roll Hall of Fame announced their nominees for the 2012 induction and the Chili Peppers made the list. This marks the second time the band has been made eligible for entry. 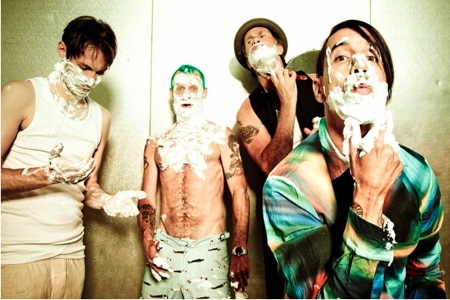 The Rock and Roll Hall of Fame allows five to seven inductees among their many nominees, so the Chili Peppers have some serious competition. They’re going up against greats such as the Beastie Boys, Joan Jett and The Blackhearts, The Cure, Rufus and Chaka Khan and the infamous Guns ‘N Roses. According to CNN, in order to recieve a nomination “an individual artist or band must have released its first single or album at least 25 years prior to the year of nomination.” The Red Hot Chili Peppers released their first album in 1984.

If the Red Hot Chili Peppers are once again overlooked by Hall of Fame voters they still have plenty to celebrate. Their new album I’m With You was released on August 26 and debuted on the Billboard charts at number two with 229,000 copies sold. It marks their sixth top 10 album and is a worthy addition to their catalogue.

During the break between their last album, Stadium Arcadium, the Chili Peppers lost a brother and bandmate in John Frusciante. The former guitarist decided to leave the group in 2008 but didn’t go public until a year later. He’s been replaced by Josh Klinghoffer, who previously played with the band as a second guitarist and tour performer.

Despite all these changes, the group has managed to stick to their funky and unique roots. Anthony Kiedis, Flea, Chad Smith and now Josh Klinghoffer are tackling the music scene with just as much passion as they did two decades ago.