Elizabeth Olsen is on the cover of the October issue of Nylon. 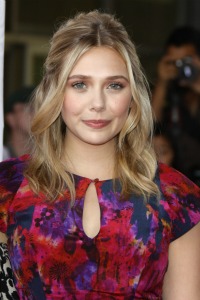 Elizabeth Olsen is poised to take Hollywood by storm. With five films in the can, including Martha Marcy May Marlene due in October, her upcoming roles include acting opposite Zac Efron, Catherine Keener and Dakota Fanning.

In the October issue of Nylon, Elizabeth Olsen talks about what she’s learned from her family — including those famous sisters of hers, the Olsen twins: Ashley Olsen and Mary-Kate Olsen.

“I have to attribute the way I have always looked at [work] to my father, because he was a really good influence on us,” Elizabeth said. “It was always very important to him that his daughters be financially independent. He wanted us to know that we could take care of ourselves, because he never liked the idea of us needing a man.”

“And witnessing how my sisters can take care of themselves financially was a great model to have. I consider myself lucky to have such a normal family.”

Elizabeth, who attended the Tisch School of the Arts at New York University where her sisters spent a brief time, says she’s glad she finally took the leap to Hollywood — but she was apprehensive after seeing how some celebs like her sisters are torn apart.

“I just always thought that theater was different from being an actor in Hollywood for some reason. It was like this safe place where people aren’t harassed,” she said. “But I was apprehensive because I saw how brutal people can be when other people put themselves out there.”

Catch the rest of the interview with Elizabeth Olsen in the October issue of Nylon magazine, available on newsstands this week.