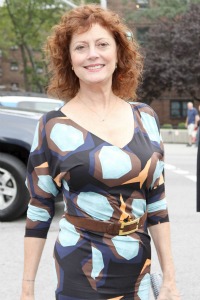 Sarandon joined the week-old demonstration to see what the fuss is all about, and came out a convert to the cause.

“I came down here to educate myself,” Sarandon told CNBC.com. “It’s been really informative and I’ll be back [following a trip to Italy]. There’s a huge void between the rich and the poor in this country.”

The actress, who coincidentally just starred in Wall Street: Money Never Sleeps, says the American financial system deserves all the vitriol currently being heaped upon it.

“Do you think if you asked that question of anyone in America the answer would be ‘no’?” she said. “It’s not to say that everything is Wall Street’s responsibility. There are good corporations. I can’t think of any off the top of my head.”

“Greed is widespread all over the world,” she added. “We have to start making human decisions and put people at the top of the line.”

Susan Sarandon has long been involved in progressive and left-wing political causes, especially those that promote social, environmental and economic justice. She used to protest with her longtime partner Tim Robbins, but the couple split in 2010.

In addition to her political activism, Sarandon has been keeping herself busy with a whopping seven movies due out in 2012: Robot and Frank, Arbitage, I Hate You, Dad, The Wedding, The Company You Keep, Cloud Atlas and Hemlock Drive.

The Occupy Wall Street protest is actually taking place about three blocks away from the famed New York financial district, at Zuccotti Park at Broadway and Liberty.