It’s the end of an era. 60 Minutes contributor Andy Rooney is stepping down from the weekly program. Retire at 65? Bah! Rooney is 92! 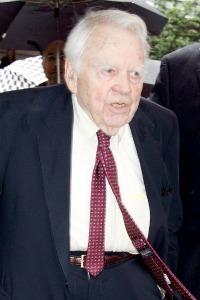 It’s kind of hard to imagine 60 Minutes without the curmudgeonly Andy Rooney giving his opinion on any and all topics, but the 92-year-old newscaster is about to retire. Rooney has been on the show since 1978 and has contributed to over 1,000 episodes of the show.

Rooney’s final rant will air this Sunday, after a look back at his career with fellow correspondent Morley Safer.

“There’s nobody like Andy and there never will be. He’ll hate hearing this, but he’s an American original,” said CBS News chairman Jeff Fager. “His contributions to ’60 Minutes’ are immeasurable; he’s also a great friend. It’s harder for him to do it every week, but he will always have the ability to speak his mind on ’60 Minutes’ when the urge hits him.”

Rooney is also the author of 16 books, and according to a CBS press release, attended Colgate University. In February 1943, he was one of six correspondents who flew with the Eighth Air Force on the first American bombing raid over Germany. He started working for CBS in 1949 as a writer for Arthur Godfrey’s Talent Scouts.

According to the release, Rooney’s first 60 Minutes piece in July 1978 was an essay about the reporting of automobile fatalities on the Independence Day weekend. He became a regular contributor that fall, alternating weeks with James J. Kilpatrick and Shana Alexander before getting the slot all to himself in fall 1979. The first season with Rooney in the full time position, 60 Minutes was number one for the first time.

More on 60 Minutes and CBS: