The full theatrical trailer for Garry Marshall’s romantic comedy New Year’s Eve has been released. And it’s packed full of love, loss and some much needed laughs. 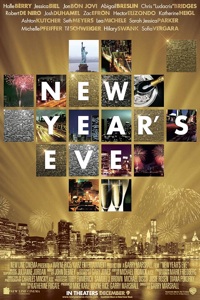 Another star studded trailer for New Year’s Eve has debuted online and it features some of the hottest actors in Hollywood. Ashton Kutcher, Halle Berry, Jessica Biel, Zac Efron and Sarah Jessica Parker are just some of the familiar faces that highlight the film.

In New Year’s Eve, several couples and singles embrace love, hope, forgiveness, second chances and fresh starts all on New York City’s biggest night! This new trailer gives us a peek at the characters and their various relationships. Sarah Jessica Parker and Abigail Breslin play an estranged mother and daughter, Katherine Heigl is the bitter ex of Jon Bon Jovi, Jessica Biel and Seth Meyers are a pregnant couple on the verge of birth and Michelle Pfeiffer is a middle age woman looking to Zac Efron to help fulfill her New Year’s dream.

On an interesting side note, New Year’s Eve won’t hit theaters during the first of the year. Instead, the film will debut on December 9, closer to Christmas.