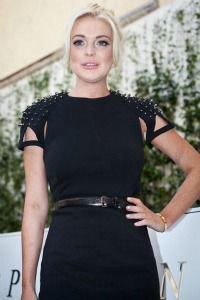 Hollywood bad girl Lindsay Lohan is at it again. The once self-professed lesbian who had a hot-and-heavy romance with Samantha Ronson is back to men — and the guy she’s currently dating is a married father.

Lohan has been spotted around town smooching Dream hotel owner Vikram Chatwal, which would be a lucrative land for her except for two tiny details: his wife and daughter.

After temporarily shacking up with Chatwal at his lavish New York apartment, Lohan was a bit put out when he asked her to vacate in anticipation of the arrival of his wife and kid, ending with a drama-filled showdown.

“Lindsay found out Vikram was hosting a dinner at the Dream, and turned up with a friend at the hotel’s Electric Room, waiting for him,” an insider told the New York Post. “That’s when the trouble started. Priya was very dignified, but Lindsay was so rude. She acted as if she’d had no idea Vikram was married, and tried to make it clear that Vikram was her friend. Others had to step in to calm things down.”

“Vikram’s father Sant Singh has tried to order Lindsay out numerous times. Vikram’s family worry that Lindsay is bad news and want him to stay away from her.”

Why Lindsay reacted the way she did is unclear as Chatwal is actually separated from Priya Sachev. The couple wed in 2006.

A rep for Lindsay Lohan says there is nothing romantic going on. “Vikram and Lindsay are good friends, and there is absolutely no romance going on between them.”

Lohan has been spending lots of time in New York and Europe lately, where she’s been busy getting Billy Joel tattoos and causing her friends and legal counsel to worry that she is blowing off her court-ordered community service — a move that could land her in jail.

Pitbull was doing Lindsay Lohan a favor, he says