Rihanna made headlines once again while filming her latest video for her song We Found Love . The singer and her crew were reportedly asked by the farmer whose land they were using to leave the premises after things got a bit too racy. 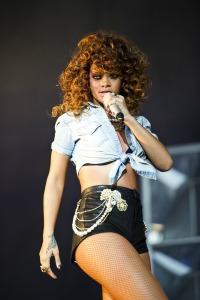 Rihanna‘s clothing choices angered an Irish farmer so much, that he asked both her and her video crew to leave his property.

Earlier this week, Rihanna was allowed to film her latest video for the song We Found Love on a lush farm in Bangor, County Down, Ireland.

The owner of the grain field, Alan Graham, allowed the music superstar to shoot the video on his land, despite telling the BBC that he did not know who she was.

In attendance during the shoot, Graham began to get increasingly uncomfortable as Rihanna’s clothing, which started with a flannel shirt, bikini top and jeans, became less and less as the song went on.

According to the Associated Press, the singer eventually went topless.

Stated Graham, a father of four, “The state of undress was becoming inappropriate. I had a conversation with Rihanna. I hope she understands where I’m coming from. We shook hands.”

Rihanna was in Ireland to perform in Belfast and Dublin.

This is not the first time a Rihanna video has caused controversy. Her last video for her single Man Down, had parents’ groups in an uproar, where in the video, the singer shoots a man after he sexually assaults her. The singer later Tweeted that the video stood for empowerment of women.

She stated, “Young girls/women all over the world…we are a lot of things. We’re strong, innocent, fun, flirtatious, vulnerable and sometimes our innocence can cause us to be naive! We always think it can NEVER be us, but in reality, it can happen to ANY of us! So ladies, be careful!”