It took seventeen years of hard work, plenty of public bumps and many struggles, but Melissa Etheridge is in a great place in her life. Her work was highlighted by receiving one of the great honors in her industry yesterday, a star on the Hollywood Walk of Fame. 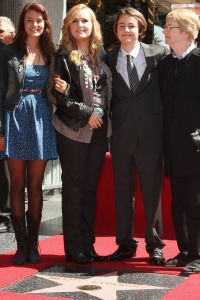 Surrounded by her children Bailey and Beckett and her mother, Elizabeth, it was a day of full-circle feelings for Melissa Etheridge, who received a star on the Hollywood Walk of Fame yesterday.

Etheridge who is a singer, songwriter and activist for women’s and LGBT issues, hopes that her star can be an inspiration to anyone who has struggles they are looking to overcome and to prove that anything is possible.

Said Etheridge, “You can have a dream that you can grow up in a small Midwestern town and believe, and desire and create a life and end up with a star on the Walk of Fame on Hollywood Boulevard.”

She went on by stating, “Let my life be an inspiration to anyone, gay, straight, breast cancer, woman, mother, any human being who recieves the inspiration from my story.”

Etheridge’s star marked the official start of Pinktober, an effort which will see special events, concerts and limited edition merchandise to benefit breast cancer research at Hard Rock Cafe eateries around the world.

After the release of her breakout 1993 album Yes I Am (after the albums Melissa Etheridge, Brave and Crazy and Never Enough) Etheridge was a voice for women who found strength in her words of empowerment. But, despite portraying a strong woman onstage, the singer was struggling with her own insecurities. She famously came out in 1993 and soon became an active spokeswoman for gay rights. After being diagnosed with breast cancer in 2004, Etheridge powered back to the top of the music world through her strength and inspirational words to others affected with the disease, celebrating an “I can do it” attitude.

Etheridge returned to the music scene with a blockbuster performance on the Grammy Awards in 2006, performing a powerful duet with singer Joss Stone and revealing to others just how beautiful a cancer survivor could look. Bravely, she hit the stage bald, but wielding a powerful guitar and plenty of guts as the two tore through a Janis Joplin tribute.

Also an Oscar winner for I Need to Wake Up from the film An Inconvenient Truth, Etheridge is still in awe of all she’s accomplished in her 50 years. “When I realized that my music was being listened to internationally, it meant so much to me. It started to become very obvious to me that music is an international language.”