David Beckham says having a girl in the house is very different from his three boys. 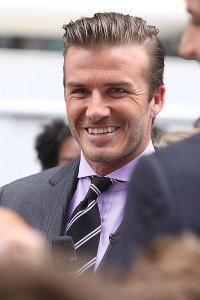 David Beckham should be promoting his new scent David Beckham Homme, but he’s so enthralled with his new baby girl, Harper, that she’s all he wants to talk about.

First up is how different she is from her three brothers, 12-year-old Brooklyn, 8-year-old Romeo and 6-year-old Cruz.

“Everything she does, from the moment she wakes up to the moment she sleeps — it’s a totally different thing. Obviously, I’m used to having boys,” David told Access Hollywood during a promotional stop for his fragrance.

“We’ve got three amazing boys, but there’s a lot of energy with them. With Harper, she’s so calm, she’s so ladylike, she’s so feminine,” he explained. “Everything she does is a milestone… the way she holds herself, the way she breathes, the way she smiles, the way she makes noises. It’s just – it’s amazing.”

When he finally got around to talking about his fragrance, it wrapped back around to — what else — the baby. Not that we blame him; she’s awfully cute.

read on for more david beckham