Eddie Cibrian is defending the super-skinny body of his wife, LeAnn Rimes. 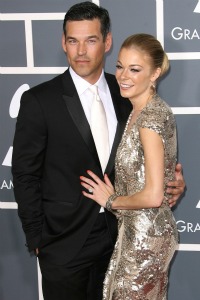 LeAnn Rimes has come under fire for her incredible shrinking frame — but her husband Eddie Cibrian says LeAnn is skinny because she eats right and works out — not because she’s unhealthy.

The star of The Playboy Club told Access Hollywood, “It bothers me because, obviously, I know she’s healthy. She eats more than I do sometimes.”

“She’s just a very [conscientious] eater, as far as what she eats. She eats pretty healthy, but she works out pretty hard too and she actually takes pride in the way she looks and it’s a shame that people will jump on the bandwagon just because she is fit. And she’s far from unhealthy,” Cibrian told Billy Bush and Kit Hoover.

“Whenever you get a picture taken of you, there’s always an angle that looks unflattering for anybody and it’s unfair to use those pictures as the basis of the way that you actually really look,” he said. “She’s in fantastic shape and very healthy and I love the way she looks.”

While LeAnn Rimes focuses on her bikini body, Eddie Cibrian and his ex-wife Brandi Glanville are battling for primetime glory. The Playboy Club airs in the same time slot The Real Housewives of Beverly Hills, in which Glanville made her debut Monday night. This week Housewives was the clear winner — and The Playboy Club may be the first fall TV show to face the chopping block.