Private Practice returns to ABC tonight, with Benjamin Bratt on board. As the title “God Laughs” suggests, nothing goes as planned in fifth season premiere. SheKnows has a sneak peak of the first few minutes!

The action picks up right where we left off when Private Practice returns tonight. With Violet (Amy Brenneman) on the run, Pete (Tim Daly) is fighting for his life, Amelia (Caterina Scorsone) is losing the fight against her addiction and Addison (Kate Walsh) and Sam (Taye Diggs) are through with all fighting — for now. 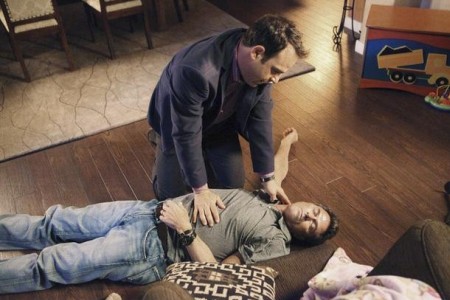 The new season actually starts in therapy with Addison, but quickly jumps back to the moment Violet walked away from her marriage with Pete to go on that book tour. Spoiler alert: she doesn’t show up this week to save her husband, who fell to the floor clutching his heart in the final moments of last season.

While Violet sits at the airport waiting for her flight, her BFF Cooper (Paul Adelstein) stops by to share a conciliatory six-pack with Pete and finds him unconscious on the floor. He rushes Pete to the hospital, where Sam, Charlotte (KaDee Strickland) and Amelia join the effort to save him.

Unlike Pete and Violet, Sam and Addie are in a better place this season, but for how long? Just because they’re back in bed together doesn’t mean Addison has forgotten she wants to have a baby. This week, she moves forward with her plan, only to run into that hot mystery man she met at the grocery story. The handsome Jake Reilly (Benjamin Bratt) is ready to give her a baby — and a kiss! Considering their chemistry, having him around should prove to be dangerous for her renewed romance with Sam.

Meanwhile, after Amelia causes a scene at a local bar, she calls Sheldon for a ride and he decides to help his not-so-sober pal get back on the wagon.