Suburgatory joins ABC’s hit Wednesday lineup, premiering after The Middle and before Modern Family, Happy Endings and Revenge. The new series is getting mixed reviews, but for the most part, garners raves for its smart, edgy humor and stars Jane Levy, Jeremy Sisto and Cheryl Hines.

ABC’s newest family moves in on the laughs tonight on Suburgatory, which sees 16-year-old New Yorker Tessa (Jane Levy) dragged to the suburbs by her dad, George (Jeremy Sisto). He’s hoping to find a more stable life for his daughter, but she’s horrified by the plastic world in which she finds herself — and truth be told, he’s a bit freaked out by it too. TV critics are calling the new fish out of water series smart and funny, if a bit heavy on stereotypes. 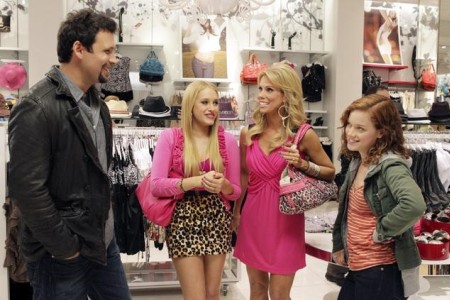 While SheKnows has to admit the pilot goes a bit overboard with the stereotypes and even misses the mark at times (as most pilots do), we have to agree with the raves over this unique father/daughter team and the show’s ability to blend that infamous, caustic New York wit with good old fashioned heart. What’s more, by pilot’s end, plastic mom Dallas Royce (Cheryl Hines) and the burbs prove to offer much more than the stereotypes that first meet the eye.

The pilot, which premieres Wednesday at 8:30 p.m., shows serious promise. It may not promise you’ll laugh the whole way through, but it does set viewers up for a season of laughs.

Here’s what other critics had to say.

An interesting little sitcom that deftly walks the line between snark and sweetness: What works in Suburgatory is that Levy is pitch-perfect, even during her many voiceovers. She’s not only got the snark but the facial expressions that illuminate her disdain for the Disneyland she finds herself in… Sisto is an inspired, counter-intuitive choice for George, because he shares Tessa’s smart sarcasm without being overly cynical… What the combination offers — especially when Tessa has sympathy for neighbor Lisa (Allie Grant, Weeds), another girl who doesn’t fit in — is room for a little sweetness to leaven the suburban send-up. Emily Kapnek (Hung) writes and executive produces Suburgatory and should get the credit for managing, at least in the pilot, to deftly handle clashing tones. — Tim Goodman, THR

ABC’s new neighborhood sitcom has clever writing and a top-notch cast led by Jane Levy…. Created by Emily Kapnek, it’s a neighborhood comedy to sit alongside ABC’s The Middle, though it is a little more Dorothy-over-the-rainbow in its affect [sic]… Hines’ Dallas may superficially personify a Real Housewife of Somewhere Not Far from New York City. But there is no malice in the actress’ portrayal, and only a sympathetic, maternal concern in the character’s desire to get Tessa out of her “lesbian boots” and into “a nice heterosexual dress shoe.” … The dialogue has a nice snap, the jokes come from just to the left of where you expect them to, and the players are all first-rate. — Robert Lloyd, Los Angeles Times

There’s a rich tradition on the big and small screen of the high school girl as amateur anthropologist: Molly Ringwald in Sixteen Candles, Winona Ryder in Heathers, Alicia Silverstone in Clueless, Lindsay Lohan in Mean Girls, Claire Danes in My So-Called Life, and on and on and on… If high school is life in miniature, then it needs some kind of wry, clever observer to figure it all out, whether she’s an insider (Silverstone), an outsider (Ringwald) or an outsider pretending to be an insider (Lohan). To that reliably funny tradition we can add Jane Levy as Tessa Altman, the smart, sarcastic heroine of ABC’s winning new comedy Subergatory… It is one of the few comedy pilots I can remember where I laughed more the second time I watched it than the first. — Alan Sepinwall, HitFix

As you’re wincing your way through Suburgatory, an unpalatable sitcom that has its premiere on ABC on Wednesday night, ponder the question that no studio executives apparently did: Who is the audience for this show? The series begins with a tenuous premise, uses it to leap to an inaccurate dichotomy and supports that with tired, unfunny stereotypes. — Neil Genzlinger, The New York Times