Celebrities are standing behind Leisha Hailey after she was kicked off a plane for kissing her girlfriend. Read on to see what they had to say. 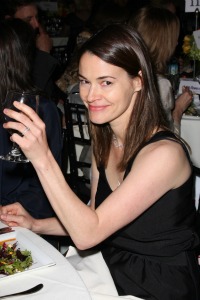 When Southwest Airlines kicked Leisha Hailey off a plane for kissing her girlfriend, they didn’t just make The L Word star angry — they fired up a whole legion of celebrities who are passionate about LGBT rights.

Twitter lit up with the stars’ indignation, most vocally from actress and comedian Sandra Bernhard. She wrote, “@Leisha_Hailey @SouthwestAir for kissing your lady! they are ridiculous. yes i would consider that illegal by the way. this is a hoot @leisha_hailey @uhhuhhermusic Southwest Airlines The LUV Airline! the ‘luv’ airline. what kind of ‘luv’ are ya talkin bout?”

“Won’t stop until @southwestair refunds in full payment on tickets from ny-phoenix #boycottsouthwest #whatwasithinkingtobeginwith,” Bernhard continued. “Please return my managers calls today @southwestair i want a full refund on my upcoming ny-phoenix tickets, i do not want to fly with you.”

Kevin Smith was booted off a Southwest flight for being too fat last year, and he defended Haley against his nemesis airline.

“Via @brett0929 ‘you see @leisha_hailey’s trouble w/ @SouthwestAir? booted for kissing her girlfriend.’ Sounds like a case of Too Fab to Fly,” Smith tweeted.

“I can tell you from experience that SWA first lies with a cover story, and then quietly changes it without admitting,” he wrote.

Sophia Bush got into the act, writing, “Dear @SouthwestAir you seriously told @Leisha_Hailey that she could not kiss her GF on the plane & escorted them off? I see straight couples kissing on planes all the time. Is discrimination a standard part of your policy? How sad, ignorant, and disgusting. #LostCustomer #NOH8”

“If a straight couple can kiss in public, a gay couple can too,” Bush continued. “That’s equality. That’s tolerance. That’s right & fair & kind.”

For their part, Southwest Airlines says the couple was removed from the flight not for the kiss but because they were using profane language.

“Additional reports from our Employees and Customers onboard flight 2274 during a stop in El Paso on Sunday now confirm profane language was being used loudly by two passengers,” said the airline in a public statement. “At least one family who was offended by the loud profanity moved to another area of the cabin.”

“Although we have reports of what Customers characterize as an excessive public display of affection, ultimately their aggressive reaction led to their removal from the aircraft. We do not tolerate discrimination against anyone for any reason. In this situation, their removal was directly and solely related to the escalated conversation that developed onboard the aircraft.”

Tell us: Were the actions of Southwest Airlines reasonable or discriminatory?