It was the cover that sparked a thousand imitators. Nirvana’s Nevermind was spoofed so many times that the image became iconic. Who would have thought a little swimming baby would become the face of a generation?

Little did Spencer Elden’s parents know that the day they dropped their little boy into a pool for a photo shoot for an up-and-coming band named Nirvana is the day that their son would become the iconic face of one of the greatest albums of all time. 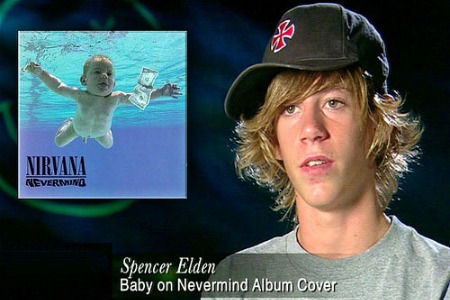 It was 20 years ago today that Nirvana’s Nevermind debuted, and became such a sensation that any album the band released after it could never compare.

Spencer Elden’s parents dropped him in a swimming pool in California, where an underwater photographer named Kirk Weddie took a whole roll of film of the beautiful — but nude — baby. The photo was chosen and used by a little-known indie band from Seattle called Nirvana for their second album titled Nevermind.

Elden, now 20, later recreated the iconic pose, albeit with shorts on, in 2008 when he was seventeen. He took the photo at the same location, the Rose Bowl Aquatic Center in Pasadena, California.

At the time, Elden’s parents were paid just $200 for the 1991 shoot. It was famously recreated by Weird Al Yankovic for his CD Off the Deep End.

He revealed to MTV in an interview that being known as the Nirvana baby can be good for “business”. He stated he uses it when he wants to pick up girls. He stated, “I have to use stupid pickup lines like, ‘You want to see my p***s again?’

The perk, a platinum record from the band and a place in music history.