It’s been 20 years since Dave Grohl and Krist Novoselic released Nevermind with their friend, Kurt Cobain. Now, the remaining two are remembering both the happy times — and bitter memories — that make up the album.

Former Nirvana bandmates Dave Grohl and Krist Novoselic want to make one thing clear on the twentieth anniversary of their iconic album Nevermind: they weren’t miserable. 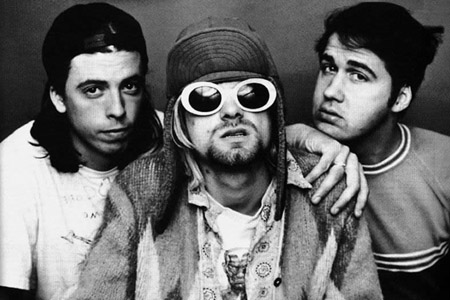 “I think there’s a popular misconception that the band traveled with this black cloud over our head all the time,” Grohl said during a recent interview hosted by Jon Stewart on SiriusXM.

Grohl and Novoselic shared anecdotes about the 16-day recording of the album, including that Grohl and late lead singer Kurt Cobain tried to drink protein shakes to gain weight and that they stayed in the same hotel as Europe and Kid ‘N Play.

“We’d practice five or six nights a week, playing the songs [from the album] over and over. We were determined to make a good album,” he continued.

Nevermind producer Butch Vig agreed. “On Nevermind, it’s really about the performances,” he said. “They were so focused when they came in.”

The troubled Cobain was the backbone of the album, Novoselic remembered. “Kurt’s intensity was captured through the music.”

“Kurt’s melodies were so brilliant, and his lyrics were so meaningful. His voice was beautiful,” Grohl told USA Today recently. “He’d come in almost every day with a new song. How did he do that? He was an endless stream of beautiful music. He made it look so easy.”

“It’s a real simple record. A drum set, a bass, a couple of guitar overdubs and a vocal that’s doubled. That’s it. By today’s standards, it might as well have been done at Sun Studio,” Grohl added.

Nostalgia aside, Grohl revealed that there still is a feeling of unfinished business when he listens to Nevermind.

“There’s a joy and a sadness for me, because of the way things ended. There’s some anger. There’s a whole lot of things,” he said. “But in the end, listening to this music reminds me that this is what it was all about. I have Nevermind on vinyl, and every now and then I’ll put it on and go, ‘Wow, this is a great record.'”

What is your favorite track on Nevermind?