Kevin Smith may have once been known as Silent Bob, but those days are long gone. The Red State writer and director recently unleashed on former mentor Harvey Weinstein — and it wasn’t pretty.

What’s the deal with Kevin Smith and Harvey Weinstein’s war of words? The shouting match all went down at the premiere of Red State at the Sundance Film Festival. What could the former mentor have done to incite the verbal wrath of a man once known as Silent Bob? 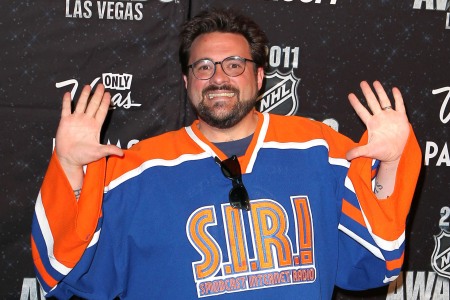 One moment Kevin Smith was thrilled to be at the premiere of his horror film Red State, the next he hears the voice of Harvey Weinstein — and it just won’t stop. The 41-year-old director tells how it all went down to The Guardian, saying, “I open the curtain at the back and I see Harvey outside, talking.”

Harvey Weinstein, who had been Kevin Smith’s boss during the filming of cult-classic Clerks, had promised to attend the Red State premiere, but instead of being a good theater patron he was busy checking football scores. Smith continues, “He’s talking about the Jets. Loud as [expletive]. The opening of my movie, first seven minutes.”

“Old Kev just would have gone, ‘Harvey, shh, movie’s on.’ But it disgusted me so much. It doesn’t get much more heartbreaking,” Kevin Smith says of the moment he snapped. “So I [expletive] lost it, and I went out and said, ‘Hey. Shut the [expletive] up!’ And he looked at me with [expletive] hate in his eyes. And I said, ‘Yeah. That’s me and I’m saying it.’ And he just left.”

How silent to you think the Red State theater was after that?

What do you think of Kevin Smith and Harvey Weinstein’s fight?