Angelina Jolie took her tots for a fun-filled playdate with Gwen Stefani and her kids in London. 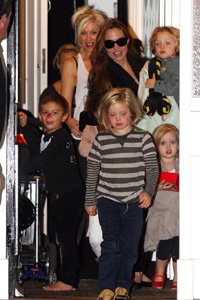 Talk about a high-powered playdate! Angelina Jolie was spotted leaving Gwen Stefani’s North London home with her kids last night after the families enjoyed dinner and a playdate.

Jolie arrived at Stefani’s home at 5 p.m. with Zahara, 6, Shiloh, 5 and 3-year-old twins Vivienne and Knox. Maddox and Pax must have had other plans that night, however Stefani’s two boys, Kingston, 5, and Zuma, 3, probably had fun showing off their toys to the Jolie-Pitt kids.

Jolie and Stefani have a lot in common, as Shiloh and Zuma were born just days apart. As the evening progressed, security guards brought back food from Wagamama’s restaurant for the kids to enjoy.

Stefani is gearing up for the release of her Harujuku Mini kid’s clothing line for Target –perhaps we will see the Jolie-Pitt kids wearing some of her fab fashions?

Jolie and Brad Pitt have relocated to London while he finishes filming zombie movie, World War Z. In the meantime, Jolie has had fun taking her kids to the toy stores, London aquarium and shows. She even took Zahara and Shiloh to get their ears pierced – however Shiloh reportedly changed her mind after seeing the piercing gun!

Perhaps Angelina’s next playdate will be with London-based Gwyneth Paltrow and her two kids, Moses and Apple? They could always talk about how Paltrow dated Pitt back in the day.