Ellen DeGeneres is okay after a very public heart scare. Not only is she doing well, she’s dealing with it in the best way possible. She’s laughing about it. 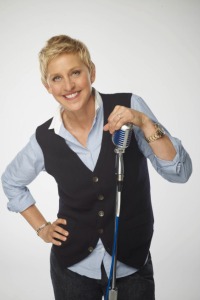 The comedian and host of The Ellen DeGeneres Show reassured fans during her opening monologue yesterday after chest pains resulted in a call to 911. (The show airs today.) She explained that she wanted to tell everyone, ”what is going on in my life because TMZ is also telling you what’s going on in my life.” She claimed to be fine, joking that ”the paramedics were strippers that I had called.”

Website TMZ first reported that paramedics were called to the Warner Bros. lot where DeGeneres tapes her hit show after she complained of chest pains during a producers’ meeting. She joked about the vast number of ambulances that showed up, calling it ”one marching band short of a parade.”

”Then they come in with an axe. Break the door down. It was open. I don’t know why they did that. They came in, they asked me all the questions: ‘How are you feeling? When did it start? Family history? Can I get tickets to the 12 Days (holiday giveaway shows)?’ All the questions that they would ask, but everything is fine,” she said.

”I have a baboon heart that I had put in earlier…It’s not true,” she laughed. ”But I want to say thank you to all the paramedics and the nurses who showed up and everybody and TMZ for caring so much…I appreciate it.” Ellen, we’re glad you’re okay. And laughter is certainly the best medicine!

DeGeneres is a vegan and frequently does vegan cooking segments on her show. She recently launched a website called Going Vegan With Ellen, which gives recipes, tips on going vegan, cites vegan celebrities and provides resources.