Ricki Lake has said that Kirstie Alley is her inspiration for being on Dancing with the Stars, however her dancing pro, Derek Hough, says enough is enough!

Ricki Lake was inspired by the amazing weight loss of Kristie Alley during her stint on Dancing with the Stars –and credits the slimmed down Alley as her inspiration during her own time on the show. Her dancing partner, Derek Hough, seems to be getting frustrated that Lake is more focused on her weight loss than her dancing ability. 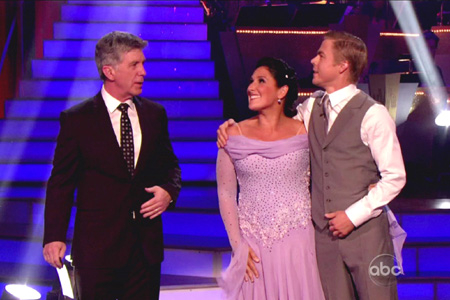 “I’m hoping to pull a Kirstie Alley,” she said. “Every part of my body hurts. … When I went in for a costume fitting, I’ve lost 8 ½ inches. Three inches in my waist. Three in my hips. Over an inch in my thighs and another inch and a half on my arms. It’s crazy.”

The former talk show host also has clothes in several different sizes, like Alley did. “I have two sizes of Lucky Brand jeans: 8 and 6. Usually I wear the 8 because they are more comfortable but now even the 6 is too big. They used to be tight,” she gushed.

Her dancing partner, Derek Hough, says it’s time for Lake to quit focusing on Alley, and to start focusing on herself.

“I’m me, I know, I know,” Lake responded. “That’s probably good advice. I really love working with Derek. He’s such a good teacher and I’m learning so much. He encourages me. I feel like I’m learning that way. He’s really intuitive with me.”

The pep talk must have paid off, as Lake and Hough were on top of the leader board after scoring 23 points for their jive.

“I’m having the time of my life,” Lake said.