Gwyneth Paltrow has successfully made the transition from ingenue to leading lady, and gracefully, made superstardom and motherhood look easy. All while juggling an Oscar in her back pocket. 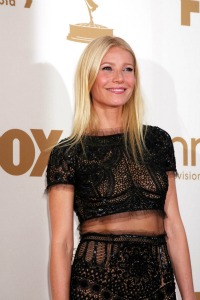 With an Emmy, Golden Globe and Oscar under her belt, is there anything left for this A-list actress to accomplish?

Plenty, according to Paltrow.

There’s another cookbook to write, a hot website to maintain (GOOP.com), a fabulous life as the wife of Coldplay’s Chris Martin and being a mother to two adorable children, Apple and Moses.

According to Harper’s Bazarr UK, Paltrow revealed her work ethic and how to start something new when everyone tells you not to. “Any time you do something with any degree of sincerity, people make fun of you. That’s totally fine, I don’t care,” she stated. “I don’t read any of it. My thing with Goop has always been if you don’t like it, then don’t log on to it. There were a couple of times when I thought, ‘I’m just gonna stop doing it. People are so mean to me. I don’t want to do it.’ But then I was like, ‘Who cares what some lame person out there says?’ I was in Italy once and this old man came up to me and said, ‘I had the best time in Nashville because of Goop.’ And that is so worth it to me.

Paltrow began her career portraying Brad Pitt’s love interest (on-screen and off) in the hit film Se7en. She won a Best Actress Oscar for Shakespeare in Love, famously dated Ben Affleck and most recently, nabbed excellent reviews for her role in Contagion, co-starring her former The Talented Mr. Ripley pal, Matt Damon.

Earlier this month, Paltrow signed on to star alongside Mark Ruffalo and Tim Robbins in Thanks for Sharing, to hit theaters next year. She also is rumored to be returning to Glee for another turn in her Emmy-winning role of Holly Holiday, of which she states, “Holly is probably the most fun character I’ve ever gotten to play.”