A homeless Sly Stone says he is still using drugs but wants to get clean.

Sly Stone is homeless and living in a van — but the funk legend says he wants to turn his luck around. 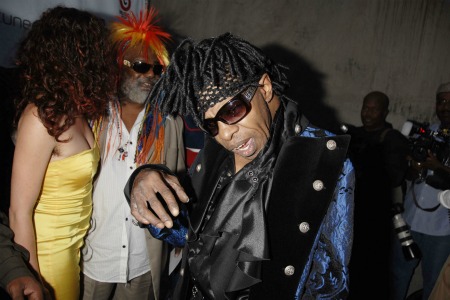 Tracked down by a reporter for SplashNewsOnline, the ex-frontman of Sly and the Family Stone says he is trying to stay clean and has even chosen a rehab center.

When the reporter asked Stone if he was currently using drugs or alcohol, Stone was nearly incoherent but said he had not used cocaine or alcohol in a week and a half.

“But I’ll tell you what, I got a uh, a rehab that I’ve chosen, that I’m gonna go… in this van. I can park it next door to this rehab facility and put my studio equipment in it. And if there’s no problem with my music and I’m not drinking…”

Sly Stone sold the rights to most of his songs to Michael Jackson for a paltry $1 million in 1984, and now it seems he’s hoping the Jackson family will help him out in his time of need — despite the fact that they are a little busy with the start of the Michael Jackson manslaughter trial.

“I have no doubt that I am going to stop by this rehab facility that I have chosen and I’m ready any time,” he said.

Stone is destitute and in the middle of a $50 million lawsuit against his former manager, who he accuses of stealing his money.