Sam Worthington threatens to end it all in the upcoming Man on a Ledge. Does Elizabeth Banks save the day?

Australian actor Sam Worthington is building a career out of playing rough-and-tumble characters in movies like Avatar and Terminator: Salvation. He’s continuing down that path with the upcoming Man on a Ledge, co-starring Elizabeth Banks. 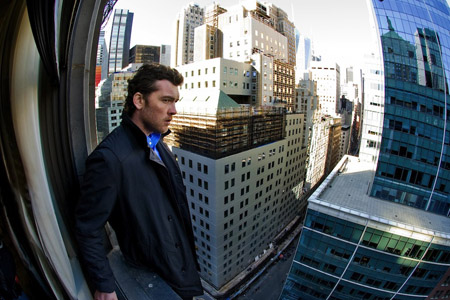 In Man on a Ledge, Worthingon is an ex-cop-turned-fugitive who threatens to jump from a ledge of a high-rise building while Banks, a hard-living New York Police Department negotiator, tries to talk him down. As the situation intensifies, she realizes that he might have an ulterior motive. And he does – the suicide attempt is planned to distract the NYPD from a huge diamond heist.

The film is sure to continue Worthington’s ascent into the upper echelons of Hollywood. However, he’s not worried about being a big star.

“You can write whatever you want about me in websites and newspapers, but no one really knows me. They get the idea that I’m a tough, heroic figure, but I’m a sensitive pussycat. When I do my job, I dive into these characters and try to flush something out of myself into these characters, and hopefully that translates well.”

Talented, handsome and humble? We love it!

Watch Sam Worthington and Elizabeth Banks in Man on a Ledge

Will you see Man on a Ledge?