Nancy Grace insists she didn’t have a full-blown wardrobe malfunction on Dancing with the Stars Monday, even as nip slip pics make the rounds on the internet and folks from the DWTS live audience say they saw some nip. The buxom and controversial talk show host claims her girls were doing the jig, but thanks to her costume’s “industrial size precaution,” didn’t come all the way out to play. 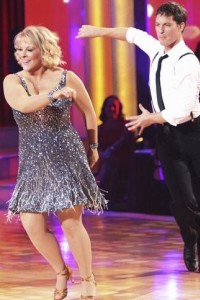 Controversial TV personality Nancy Grace has been showing America a new side of herself on Dancing with the Stars, but Monday night, she may have shown more than she intended. Cameras panned away with haste when one of her breasts popped out of her costume.

“On the European version that would be perfectly fine,” DWTS host Tom Bergeron quipped, and when cameras returned to the contestant, she had her face buried in Tristan MacManus’ shoulder. It was clear the 51-year-old was embarrassed by the unscheduled appearance.

Read SheKnows full rundown on Monday’s Dancing with the Stars >>>

That didn’t stop the judges from raving about her performance, however. “Nancy, vivacious, alive, and confident. It was a bit top-heavy at times, my darling — And I got an eyeful! I couldn’t miss that,” judge Bruno Tonioli teased. “But it really is great to see you taking over the dance floor and performing.”

Grace is certainly making strides on DWTS. Her quick step last night earned her a hearty 21 out of 30, an improvement from last week’s 16 points. She’s also boasting a 10 pound loss, so far.

In spite of other sites posting evidence that the malfunction occurred, with some sites even posting images that show the slip, Grace is in denial. She hasn’t spoken of it on Twitter, but did broach the subject with reporters after the show.

“When we were doing our hop scotch portion of our dance, there was a little bit of movement, but it did not rise to a wardrobe malfunction,” Grace said. “We have got every precaution known to man in this dress right here. I’m talking industrial strength precautions. So there may have been a little bit of, as Tristan said, ‘jiggling.'”

Tonight, on the Dancing with the Stars Results Show, Demi Lovato will take the floor to perform her single Skyscraper, The Script will perform their single For the First Time and someone will be sent home.

Whether or not Grace has a full-fledged nip slip, she should survive to dance another day and SheKnows suspects she’ll find a way to further fortify her “industrial strength” wardrobe next week.