Lady Gaga is devastated over the recent death of 14-year-old Jamey Rodemeyer. She took her rage all the way to the top when she rallied President Obama to do more to stop bullying. 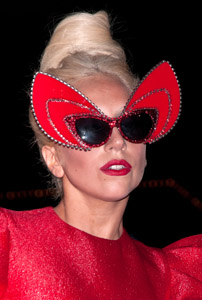 Lady Gaga promised to push President Obama to recognize bullying as a crime after 14-year-old Jamey Rodemeyer took his own life last week after years of bullying.

“I am meeting with our President. I will not stop fighting. This must end. Our generation has the power to end it. Trend it #MakeALawForJamey,” Gaga tweeted after his death. She also added that she spent a few days “reflecting, crying and yelling” after he took his life.

She made good on that promise during a $35,800-a-person weekend fundraiser for President Obama in California. Gaga told “everyone in the room, including the President, to do what they can to prevent bullying,” according to ABC News. She asked Obama a question during the question and answer portion of the dinner and thanked him for his work with the anti-bullying conference he organized with wife Michelle Obama. They also spoke for privately for a couple of minutes.

“Bye Mother Monster. Thank you for all you have done. Paws up forever,” he tweeted on September 18.

“Don’t forget me when I come crying to heaven’s door,” he added on his Facebook page, quoting Gaga’s song The Queen.

Despite the public attention, Rodemeyer’s family said he’s still being bullied, even after death.

“JAMIE IS STUPID, GAY, FAT ANND [sic] UGLY. HE MUST DIE!” one post said, according to local reports. Another read, “I wouldn’t care if you died. No one would. So just do it 🙂 It would make everyone WAY more happier!”

A vigil for the Buffalo, N.Y. teen reportedly turned horrid after positive chants turned into taunts.

“She was having a great time, and all of a sudden a Lady Gaga song came on, and they all started chanting for Jamey, all of his friends,” Rodemeyer’s mother told NBC after her daughter returned home devastated. “Then the bullies that put him into this situation started chanting, ‘You’re better off dead!’ and ‘We’re glad you’re dead!’ and things like that.

“My daughter came home all upset. It was supposed to be a time for her to grieve and have fun with her friends, and it turned into bullying even after he’s gone,” she added.

“I can”t grasp it in my mind,” Tim Rodemeyer told NBC. “I don’t know why anyone would do that. They have no heart, that”s basically what it comes down to.”