Chuck Lorre is still harboring resentment towards Charlie Sheen in the form of his infamous vanity cards. 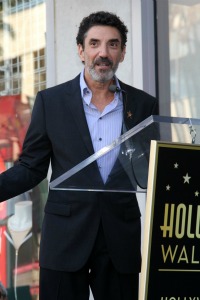 Charlie Sheen and Chuck Lorre settled their lawsuit, but they didn’t bury the hatchet. The Two and a Half Men creator is still fuming about the way things went down with the actor — and still talking about it in a very public way.

Lorre’s latest anti-Sheen rant came courtesy of the vanity card at the end of the credits for last night’s episode of Two and a Half Men. Obviously still pretty ticked off about the whole deal, Lorre wrote:

“Sometime last year I realized I had become the unwilling contestant in a reality show. I didn’t understand the rules, wasn’t sure if there even were any, and pretty much hated every second of it. For many months I kept hoping and praying that it would end. But it did not. Somewhere along the way, something inside me died. Anyway, now, suddenly, I’m being told that the reality show’s been cancelled. Apparently, it was just one of those things that somehow got out of control. Sorry. Whoops. Live and learn. Moving on. Game over. And that’s fine. I am so good with that. Yes, please, let’s all move on. There’s just one problem. That thing inside me that died? It walks at night. It’s angry. It’s hungry. And worst of all… it’s writing a tell-all book.”

While Chuck Lorre did not mention Sheen by name — the settlement most likely forbids it — it’s pretty obvious who he’s talking about.

Sheen is being paid out a reported $100 million over the next ten years as part of the “Michael J. Fox” clause in his Two and a Half Men contract. While he has been really nice about the whole situation lately — even apologizing to the show at the Emmys and wishing everyone well — Lorre doesn’t want to let go.

Could be because Sheen ripped Lorre’s rep to shreds in a very public outburst earlier this year.

Regardless, the hint that Lorre will be writing a tell-all book is interesting. Earlier this year Sheen mentioned he was shopping his own tome, but no word on whether it was ever picked up by a publisher.