Eddie Cibrian and Brandi Glanville are butting heads again — in TV land. The former lovebirds fought for primetime supremacy Monday night when Glanville debuted on The Real Housewives of Beverly Hills during the same time slot as Cibrian’s The Playboy Club. 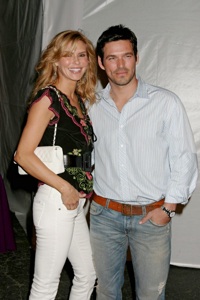 Brandi Glanville has finally made her small screen debut on Bravo’s hit reality series The Real Housewives of Beverly Hills. Glanville is the former wife of actor Eddie Cibrian and the mother of his two children. Cibrian currently headlines the new NBC drama The Playboy Club, which coincidentally airs during the same time as Housewives (10 p.m.).

Glanville and Cibrian were married for almost a decade before they filed for divorce in 2010. The rift was allegedly caused by the relationship between Cibrian and singer-turned-actress LeAnn Rimes, whom he officially married earlier this year.

Glanville’s highly publicized divorce made her one of Hollywood’s most talked about women, which means she’s a prime candidate for The Real Housewives. During Glanville’s introduction, the ladies of the show were cordial but not welcoming. According to CBS news, this season Glanville, along with fellow newcomer Dana Wilkey, will be featured as friends of the cast but not official “housewives.”

Over on Bravo’s sister network (NBC), Eddie Cibrian was tackling his own drama on The Playboy Club. The series, which got off to a rocky start when it premiered last week, is not improving. HitFix reports that the show’s ratings dipped Monday night to an underwhelming 3.91 million viewers. Considering the marketing and controversy surrounding the series, these numbers are shocking.

Glanville may be a featured player on The Real Housewives of Beverly Hills but she has potential to become more. On the other hand, Cibrian has a real uphill battle on his hands. If the ratings continue to decline, The Playboy Club could become the first canceled show of the new season.