It was the season premiere that broke records, Alec Baldwin is now the person who has hosted Saturday Night Live more than any other, a record 16 times.

Alec Baldwin shattered all hosting records at NBC’s Saturday Night Live on September 24, and he is now the person who has taken the realm more times than any other, a whopping 16 times. 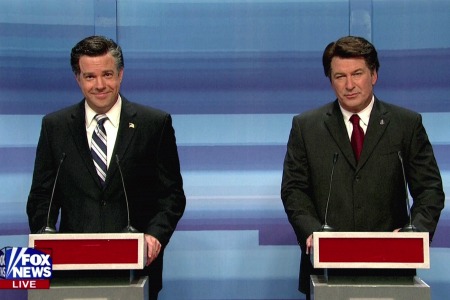 Baldwin was, prior to the premiere, tied with Steve Martin for the most hosting duties. But not taking this pass lying down, Martin made sure to make an appearance on the opener, in the opening skit, alongside Seth Rogan.

While there might be some nepotism on NBC’s part (because Baldwin is wildly successful on NBC sister show 30 Rock), the fact is that he’s great at sketch comedy and the audience is always welcoming with any chances he takes while filming the live show. His ability to keep a straight face, deliver one double-entendre after another and his dead-on ability to impersonate political figures and others is what has him returning to the show time and again.

In fact, Baldwin’s appearances have become so legendary that the ice cream genius’ over at Ben & Jerry’s named their newest flavor after one of his most memorable bits, Schweddy Balls.

It was earlier this year that former SNL cast member Ana Gasteyer told reporters that Schweddy Balls would be made into a new Ben & Jerry’s flavor. Said Gasteyer, “This sketch has this crazy, massive popularity that’s kind of had a half-life since I left the show.”

Other memorable Baldwin skits include any sketch where he portrays Tony Bennett, Wii guys, Canteen Boy and the two times Steve Martin tried to murder Baldwin.