Hysterically funny but with a healthy dose of common sense about causes that matter, Ashton Kutcher has gone from adorably dopey Michael Kelso on That ’70s Show to a force of nature in modern culture — and that’s pretty hot! Now Kutcher, the first Twitter user to reach one million followers, is filling the space Charlie Sheen left behind in Two and a Half Men. Despite Ashton being recently featured in headlines for potential marriage trouble with Demi, we have no doubt he’ll flourish and then some. 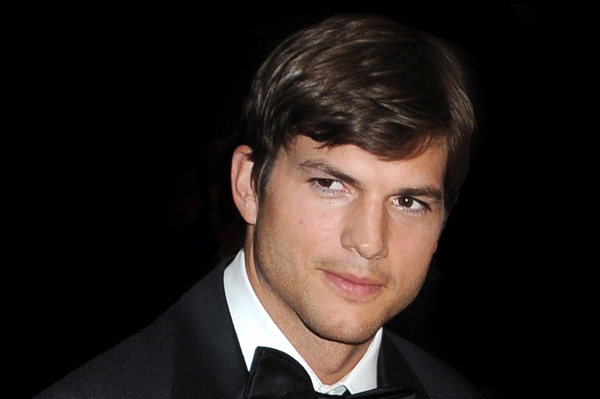 He makes us laugh 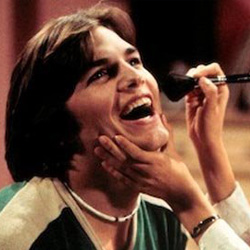 Once we laid eyes on Kutcher as Michael Kelso on That ’70s Show, we were hooked: That lean, mean bod, that impeccable comic timing… We wanted him to tell us dirty jokes indefinitely. And he sort of did. He went on to make Dude Where’s My Car?, which is comic genius that holds up to this day and features two hot guys in one film:
Kutcher + Seann William Scott = yum!

Kutcher followed his newfound success up by producing and starring in a show that eventually became a pop-culture watchword: Punk’d. With Kutcher’s assistance, the talented crew managed to do things like bring Justin Timberlake to tears and make Oscar-winner Hilary Swank accidentally attack a child using a robot (you gotta see that one). And being the funnyman that he is, Kutcher was a natural in super-sweet, madcap rom-coms like Just Married, What Happens in Vegas, Valentine’s Day and No Strings Attached. Seriously, his role as a lovelorn florist in Valentine’s Day was one of our faves!

We’re glad a talent scout plucked him out of Iowa to entertain the masses. He was discovered in a “Fresh Faces of Iowa” modeling competition when he was enrolled at the University of Iowa. Shortly after the contest, he dropped out of school and jetted off to NYC to strut his stuff!

He supports a slew of worthy causes 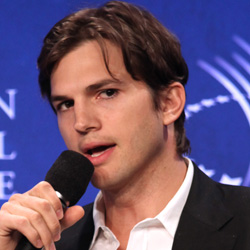 Kutcher recently banded together with wife Demi Moore to create The Demi and Ashton Foundation (DNA), an organization that seeks to end sex trafficking and slavery throughout the world. Shadowing the problem itself, the couple solicit donations primarily online. “I don’t believe that there’s a problem in the world that exists that the solutions didn’t exist before the problem,” Kutcher told Piers Morgan this year. “So that’s why we’re using social media for this campaign. It’s to actually go right into the heart of where it’s taking place. Seventy-six percent of the transactions for child sex slavery are actually happening online. So if we can motivate people while they are online to do something about that, then we can make a dent.”

In 2009, after beating CNN (yes, CNN!) in Twitter’s million-followers contest, he announced he’d donate $100,000 to the fight against malaria. As if that’s not enough, Ashton has appeared on shows like Politically Incorrect with Bill Maher to share his views on world issues. And in 2010, Time magazine named him one of the Top 100 Most Influential People. Not a bad resume for a former male model!

He’s all about modern technology 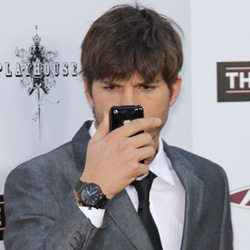 Acting, producing, modeling — what doesn’t this guy do? Another pot Kutcher has his hand in is Katalyst Media, a company he founded along with Jason Goldberg that has produced TV shows and films but will also make web content available: “Entertainment, really, is a dying industry,” Kutcher told FastCompany. “We’re a balanced social media studio, with revenue streams from multiple sources” — film, TV and now digital. “For the brand stuff, we’re not replacing ad agencies but working with everyone to provide content and the monetization strategies to succeed on the web.”

Before getting hitched to actress Demi Moore, Kutcher was linked to stars including January Jones and Brittany Murphy (RIP). He’s been wed to Moore, 48, for almost exactly six years. We love that he digs older women! Random cheating allegations have surfaced in the recent past (say it ain’t so, Ashton!), and resurfaced most recently last week, but nothing has been confirmed. So until it is, we salute his six-year marriage, which is basically a golden anniversary in Hollywood years. Congrats! 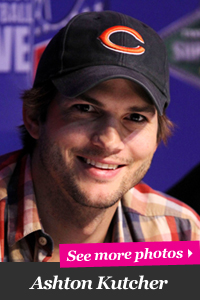